‘If immune erosion occurs after two doses and just a few months, how can we exclude the possibility that effects of an untested “booster” will not erode more rapidly and to a greater extent?’
— Read on americasfrontlinedoctors.org/news/post/vaccine-acquired-immune-deficiency-syndrome-vaids-we-should-anticipate-seeing-this-immune-erosion-more-widely/

COVID-19: stigmatising the unvaccinated is not justified – The Lancet
— Read on www.thelancet.com/journals/lancet/article/PIIS0140-6736(21)02243-1/fulltext

Increases in COVID-19 are unrelated to levels of vaccination across 68 countries and 2947 counties in the United States
— Read on www.ncbi.nlm.nih.gov/pmc/articles/PMC8481107/

Large-scale COVID-19 vaccinations are currently underway in many countries in response to the COVID-19 pandemic. Here, we report, besides generation of neutralizing antibodies, consistent alterations in hemoglobin A1c, serum sodium and potassium levels, coagulation profiles, and renal functions in healthy volunteers after vaccination with an inactivated SARS-CoV-2 vaccine. Similar changes had also been reported in COVID-19 patients, suggesting that vaccination mimicked an infection. Single-cell mRNA sequencing (scRNA-seq) of peripheral blood mononuclear cells (PBMCs) before and 28 days after the first inoculation also revealed consistent alterations in gene expression of many different immune cell types. Reduction of CD8+ T cells and increase in classic monocyte contents were exemplary. Moreover, scRNA-seq revealed increased NF-κB signaling and reduced type I interferon responses, which were confirmed by biological assays and also had been reported to occur after SARS-CoV-2 infection with aggravating symptoms. Altogether, our study recommends additional caution when vaccinating people with pre-existing clinical conditions, including diabetes, electrolyte imbalances, renal dysfunction, and coagulation disorders.
— Read on www.nature.com/articles/s41421-021-00329-3

They say that history doesn't repeat, but it rhymes.

Let's take a little trip down memory lane, examining the track records of three people who push Covid-19 vaccination and the Covid-19 hysteria.

In due course, the vaccine will be made available to the general public."

Six million people ended up taking Pandemrix in the UK.

Some doctors described the subsequent rise in narcolepsy as an epidemic.

It ended up being withdrawn after it was found to be unsafe.

In relation to Covid-19 vaccinations, Scally has said:

“The safety processes have not been cut short on these vaccines, and I'm very, very confident about them.”

Holohan said that Pandemrix had "a very good safety profile".

"He added that it was very important young people in at risk groups get vaccinated as quickly as possible."

Holohan: "We have no hesitation in recommending it."

A case against the HSE in relation to this was settled as recently as November.

The victim argued that "there was a failure to fully inform people of the risks associated with the vaccine, in particular its effect on children."

‘‘Even if you erred on the side of caution and estimated that one million people got it, and that one in every 1,000 of those people were to die, it is like four jets going down in Dublin airport.”

"Most people appear to not be immune to the virus,” McConkey continued.

“…this influenza, while it is not particularly severe in many cases, does appear to be quite infectious.”

The eventual death toll in Ireland from swine flu was 27.

This was as bad as his swine flu prediction, being off by a factor of 40x (using the fabricated Covid death numbers – he's even more wrong than this).

McConkey is on the Board of the European Vaccine Initiative.

The links are all very obvious after a while:

People are entitled to get things wrong. Of course, nobody can get everything right.

But if someone's track record includes whipping up hysteria or pushing a hastily-manufactured vaccine, and they are doing it again – why trust them this time? 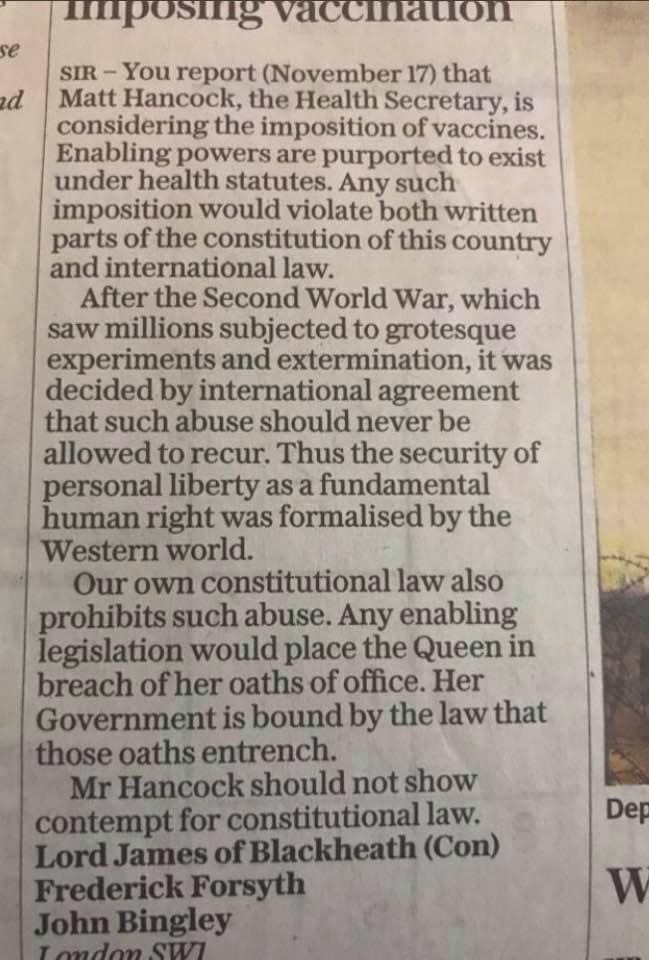 COVID-19 vaccines designed to elicit neutralising antibodies may sensitise vaccine recipients to more severe disease than if they were not vaccinated. Vaccines for SARS, MERS and RSV have never been approved, and the data generated in the development and testing of these vaccines suggest a serious mechanistic concern: that vaccines designed empirically using the traditional approach (consisting of the unmodified or minimally modified coronavirus viral spike to elicit neutralising antibodies), be they composed of protein, viral vector, DNA or RNA and irrespective of delivery method, may worsen COVID-19 disease via antibody-dependent enhancement (ADE). This risk is sufficiently obscured in clinical trial protocols and consent forms for ongoing COVID-19 vaccine trials that adequate patient comprehension of this risk is unlikely to occur, obviating truly informed consent by subjects in these trials.

[A]ll eyes are on Pfizer and Moderna […] both companies to claim around 95% efficacy.

Let’s put this in perspective.

Second, these results refer to the trials’ primary endpoint of covid-19 of essentially any severity, and importantly not the vaccine’s ability to save lives, nor the ability to prevent infection, nor the efficacy in important subgroups (e.g. frail elderly). Those still remain unknown.

Third, these results reflect a time point relatively soon after vaccination, and we know nothing about vaccine performance at 3, 6, or 12 months, so cannot compare these efficacy numbers against other vaccines like influenza vaccines (which are judged over a season). Fourth, children, adolescents, and immunocompromised individuals were largely excluded from the trials, so we still lack any data on these important populations.

“Following administration of Ad26.COV2.S, fever, muscle aches and headache appear to be more common in younger adults and can be severe. For this reason, we recommend you take a fever reducer or pain reliever if symptoms appear after receiving the vaccination, or upon your study doctor’s recommendation.”

Seems a lot of unknowns and potential problems for a vaccine that, in the end, is completely unnecessary.

Antibody-based drugs and vaccines against severe acute respiratory syndrome coronavirus 2 (SARS-CoV-2) are being expedited through preclinical and clinical development. Data from the study of SARS-CoV and other respiratory viruses suggest that anti-SARS-CoV-2 antibodies could exacerbate COVID-19 through antibody-dependent enhancement (ADE). Previous respiratory syncytial virus and dengue virus vaccine studies revealed human clinical safety risks related to ADE, resulting in failed vaccine trials. Here, we describe key ADE mechanisms and discuss mitigation strategies for SARS-CoV-2 vaccines and therapies in development. We also outline recently published data to evaluate the risks and opportunities for antibody-based protection against SARS-CoV-2. Mechanisms of antibody-dependent enhancement of disease and mitigation strategies for SARS-CoV-2 vaccines and therapies are discussed.
— Read on www.nature.com/articles/s41564-020-00789-5

Antibody-dependent enhancement is a serious concern for #CovidVaccine — in fact, ADE is amongst the reasons why we never got a vaccine for coronavirus diseases in decades of research.