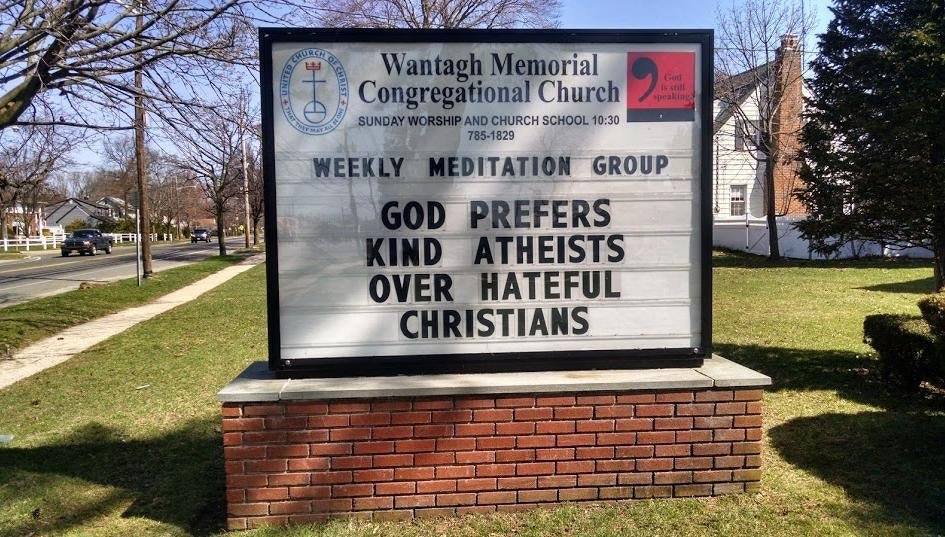 United Church of Christ. A denomination with a liberal bent. Which means they don’t reason from the Word of God. They reason autonomously.

I am willing to concede that there was a good intention behind the message, but it remains nonetheless fallacious, and it gives the wrong message to the unbelieving world out there.

The good intention was probably to try and rebuke Christians that fall into hateful behaviour. Whilst “hateful Christian” should be an oxymoron, the Bible testifies that Christians can be hindered from growing spiritually (1 Corinthians 3:1-3) after they have been born again (John 3:3), and remain carnal. Thus, however disgraceful it may be, it can even happen that a born again Christian falls in the trap of their own carnality and might display hateful behaviour. That’s shameful, and a disgrace as to testimony of the name of Christ. But a possibility.

The wrong message to the unbelieving word is to preach of a God that accepts people based on their own merits, and not on Christ’s merit. The Apostles tell us clearly that no one can be accepted by their own works, but only by grace through faith in Christ.

for all have sinned and fall short of the glory of God, being justified as a gift by His grace through the redemption which is in Christ Jesus; whom God displayed publicly as a propitiation in His blood through faith. This was to demonstrate His righteousness, because in the forbearance of God He passed over the sins previously committed; for the demonstration, I say, of His righteousness at the present time, so that He would be just and the justifier of the one who has faith in Jesus. Where then is boasting? It is excluded. By what kind of law? Of works? No, but by a law of faith. For we maintain that a man is justified by faith apart from works of the Law. (Romans 3:23-28)

An atheist can be as kind as they want all their lives, if they keep refusing the necessity of trusting Jesus for being saved, they shall not have eternal life. God will have no choice but to judge them, finding them still to be guilty outside of Christ. For all have sinned. Even the kind atheist. In fact, especially the atheist. What is atheism if not the ultimate act of pride, raising oneself above the God they know exist, and yet deny? (Romans 1:19-21)

The fallacy. God “prefers”. Nope, God does not have preference.

For there is no partiality with God (Romans 2:11)

For God has shut up all in disobedience so that He may show mercy to all (Romans 11:32)

Justification before God is by grace through faith, lest one should boast.

For it is by grace you have been saved through faith, and this not from yourselves; it is the gift of God, not by works, so that no one can boast. (Ephesians 2:8-9)

If you still think you can “be good enough” for God, drop it. It can’t happen. We have all broken God’s law. And a just judge will condemn the law breaker. But the same Judge was willing to bail us out, paying the price Himself on the Cross, and rising back to life to prove the payment was in full.

Would you accept that payment of your behalf?

Therefore many other signs Jesus also performed in the presence of the disciples, which are not written in this book; but these have been written so that you may believe that Jesus is the Christ, the Son of God; and that believing you may have life in His name. (John 20:30-31)